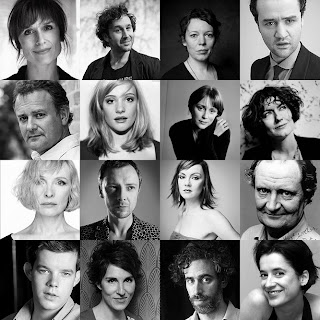 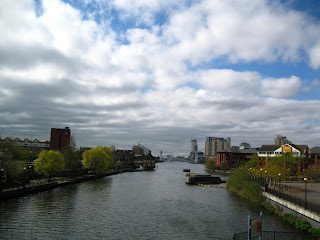 Over the past couple of weeks I've been cycling up to the Lowry in Salford bright and early each morning for work. I've never really been a big fan of the Quays, they're eerily quiet at all hours and full of modern tower blocks that look like they're inhabited by shiny carboard cut-out people. (And you can tell - they all have floor-ceiling windows so any passer by can peer in, creepy!)
Anyway, the point is, I've only ever been there on the tram (ick) before, so the daily commute through Trafford Park was new for me. And who knew I was in for such architectual wonderment each morning?! 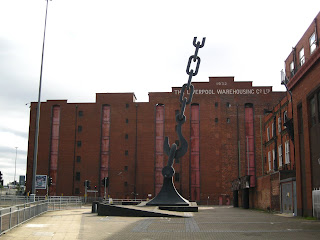 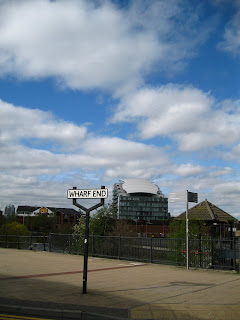 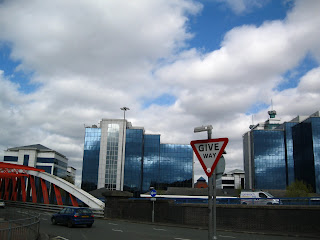 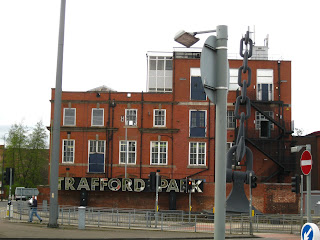 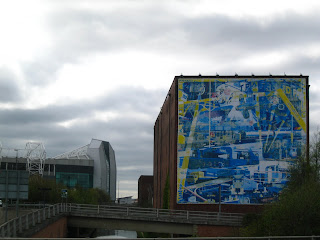 The Daisy Factory & Other Knits 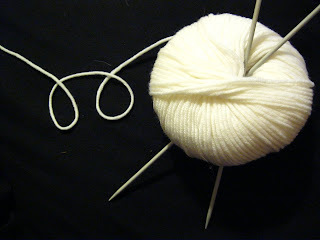 Since grabbing a break between dissertation work and revision for finals I've become quite fanatical about knitting... Aside from anything else knitted accessories are gorgeous, and beyond that cute knits are such a simple pressie idea. 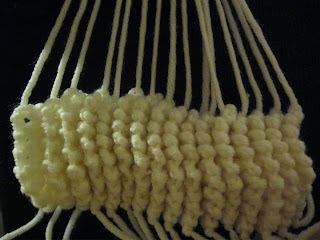 So, particularly, the gorgeous sunshine has inspired a pile of daisies. (A few of which are pictured here!) They're quite dainty, the petals are 9 stitches at the widest point on 3mm needles, and therefore are super versatile. They can be attached to jewellery backs to make great hairgrips or pins for jackets & handbags.
The important thing to remember is to keep plenty of extra wool at the base of each petal, as they need to be sticked together quite extensively. Extra wool leaves some scope to play with the structure and make sure each flower sits as you'd like it too. 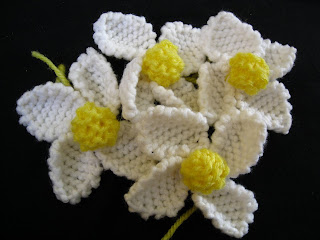 Variations on the theme... 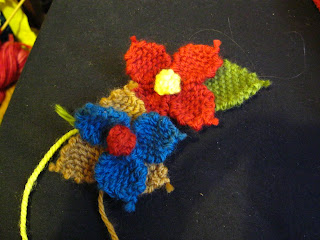 Aww, I love this, it took about 2 minutes. (It's circle that's just been tied tightly from one end to the middle so it starts to look heart shaped.) And it jazzes up a monotone outfit. (I wear them with fun pumps, of-the-moment white jeans & a plain dark tee or vest.) 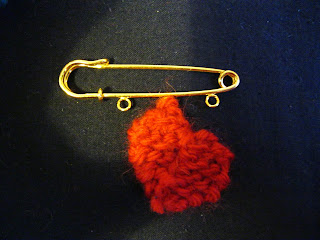 I've also been knitting kittens for the family. Patterns for these are all over the internet and superbly simple. Kittens are basically constructed from a rectangle, a thin strip for the tail, and a third piece for the head. Lots of scope to go organic with the colours...
So, I'm attempting to create a miniature knitted kitten family that replicates my Mother's real farm-kitten family. Two down, (Introducing Fuzzy and Womble.) Six to go. 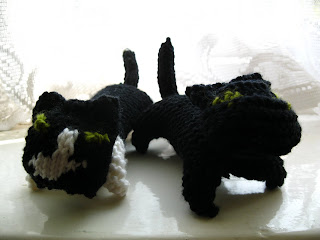 And finally.... My contribution towards a 'knitted poem' that my town is attempting to complete before the Royal Wedding weekend Poetry Festival. I followed their pattern for this one, and it was actually quite refreshing to follow exact instructions! 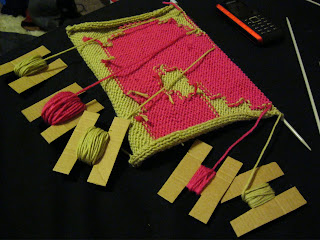 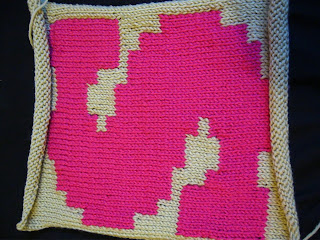 So, next project.... who knows! Perhaps a scarf or hat created from an unravelled old Grandad jumper?
Posted by Sarah Beth at 03:25 No comments: 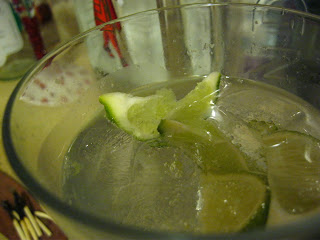 Oh, it's springtime! The sun is shining, the aviators are necessary and I shan't wear trousers again till October. Spring means I can dress creatively again, I can wear all sorts of brightly coloured things that aren't my high vis cycling jacket. Anyway, this exciting new rush of daylight to the head has unearthed a little crush... 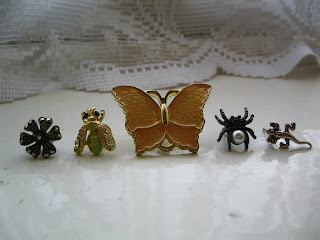 Creature shaped earrings! Gawp in wonderment at their quirky timelessness. Now, the flower on the left isn't quite a 'creature' per se, but that pair were in a jewelry box that's a family heirloom. I adore that Topshop (responsible for the middle 3) are still churning out stuff of such a similar ilk.
So, that's all, and for this week my ears (recently re-punctured after a winter of woolly hats - ouch!) shall be constantly adorned with creepy crawlies.
Hurrah, off to knit daisies now.
Posted by Sarah Beth at 08:58 No comments: 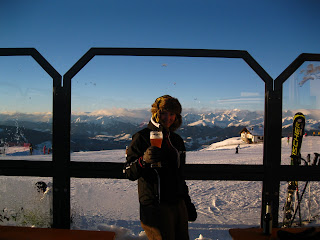 A Festive season of melted chocolate indulgence and fairytale pistes seems like a distant memory. So, waving goodbye to a deadline filled hard-hitting January the kitchen calls... And my Thai Vegetable Soup is the stuff of creamy comforting scrimping student dreams.
Method
First to hit a deep soup pan on medium heat are a few cloves of garlic (no scrimping here) crushed with the back of a knife then diced. Also half a red o
nion, diced, A chilli, also diced (or dried crushed chilli, lasts for ages and almost as good) & half a teaspoon of ginger powder. Splash the olive oil in and fry off whilst chopping a large sweet potato. Bang the potato in too, and stir for a few secs before adding 500ml of water fresh from the kettle.
Right, now I'd also add my homemade thai fish stock, which I'll explain at the end* or could be replaced with a tin of coconut milk, 1/4 of a fish stock cube, another dash of ginger & chilli, and some lime juice (equiv. about 1 lime)
Chop up about 2 courgettes and add them, then do whiff test. If th
e coconut's a tad overpowering I'd add some more lime or ginger, to taste. Leave the pot to simmer (covered) for about 20 mins, stirring regularly, and taking the time to dice some pak choi and mushrooms, then return to mash! (Or blend, but I prefer mashing...) Then time to whack in the diced veg, and leave for another 5-10 mins (if it looks pretty near to awesome at this point then cover, but not if it's a bit liquidy, let excess water steam off.) It's also time to taste test that badboy, add more of whatever feels right! Also some Cayenne pepper is handy if you fancy some more heat.
What do I need?
Garlic.
Olive oil.
Red onion.
Ginger powder.
Fresh or dried chilli.
Sweet potato.
Courgettes (or similar if you're clearing the fridge out..)
Mushrooms.
Pak Choi.
*What about that stock?
Now, this stock was a byproduct of yesterday's supper, as all the best are. 'Poached white fish & veg.' So, I poached my fish-tacular in coconut milk, with lime, chilli & a generous dose of ginger. I also whacked some veg (courgettes and mushrooms) in with it. Afterwards, the stock is saved from the pyrex dish.
(Unrelated to stock but when poaching, only half cover the fish & top with a crust of cayenne breadcrumbs, made from binding butter, plain flour & cayenne pepper.)
Et Voila! Now, doesn't that make you feel like you're here..? 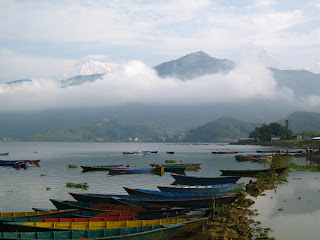 I made it myself this Christmas. Yes, that's the cool thing to do now, but also I'm a student; Happy to grasp every opportunity for being a bit cheap. Having said that, you can't really beat the satisfaction and pride from giving somebody something you created yourself. 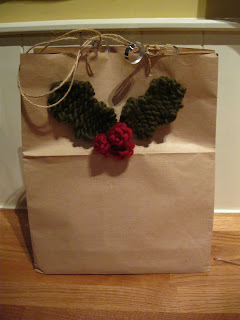 My goodies are all nestled in this gift bag, created from brown packing paper and string, a few hole reinforcers and a roll of sellotape. The method was found on Youtube, but after watching I was amazed by how simple the concept is;
Wrap a box that's the size of the bag you want (a shoebox is a good base I think.)
Then crease along the edges before slicing one end of the box off with a sharp knife and, voila, you have the base of a bag.
Creasing the sides is fairly simple as long as you're careful, ensuring the corners all meet when you're folding.
Next, I punched a couple of holes in the top and reinforced them on the inside of the bag before using the string to make the handles. This isn't a step to skip, as I discovered with trial and error, as the paper is quite delicate.
Finally, I found some scrap cardboard (cereal box, Amazon delivery packaging, etc) and made a base to put inside the bag, this helps to strengthen it and keep the structure when it's full.
I also knitted the holly on the front of the bag, that's sewn to the paper. It's not a tutorial followed, but a fairly simple pattern using added loops and knit-two-together techniques to get the spiky holly shape. The berries are just circles that are stitched together to make balls. 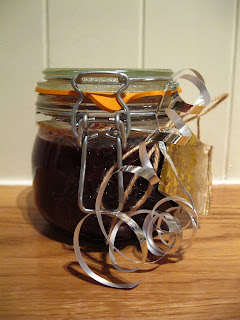 The first treat inside is a delicious Spiced Damson and Apple chutney, with homegrown damsons and apples, naturally! The recipe for this is from Delia Online, although Delia is awfully faffy with her spices, I use ground instead of fresh, and chuck 'em in instead of 'suspending them above the pot in muslin.' It still tastes amazing my way. 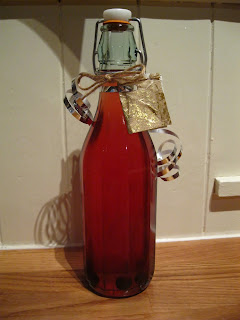 Ah, Sloe Gin. This is a yearly brew, thanks to an abundance of Sloe trees in our garden. Very easy. It involves a quality bottle of gin, (thanks Gordon) and freshly picked sloes that are spiked all over with a toothpick. Proportionately, you'll also need about half the weight of sugar that you have of sloes. Whack the ingredients in a sterilized and sealed jar, and shake frequently for about 2 weeks. After that, return each week to give the mixture a shake. It should be gorgeously sweet after about 3 months, (coinciding quite well with Christmas!) but it'll continue to improve with age.
I decant the gin into these cute little Lakeland bottles to give away as presents. 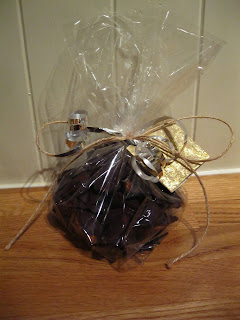 And finally! These are caramelized chocolate brazil nuts, a traditional favourite of my Dad's, that I've decided to create myself this year. Quite simply, (and found online at about.com) brazils are whacked in a non stick pan with a generous amount of granulated sugar and a hunk of butter. Stir until the sugar melts, and for about five minutes after that.
Lay out, separated, on baking sheets and leave to cool until the sugar is solid (about half an hour.)
Now, melt a very large bar of deep dark chocolate (85% cocoa solids) in a bowl over a pan of boiling water. Ensure it's in a bowl big enough so that you can add the brazils after you've taken the melted choc off the heat.
Stir until the brazils are covered, and whack it in the fridge for a couple of minutes. Repeat this step a few times, about 3.
Finally, lay the chocs out on a baking sheet again and leave to cool overnight in the fridge before presenting in cellophane.
Merry Christmas!
Posted by Sarah Beth at 02:07 No comments:

Because each one is worth a thousand words? I love art, I love playing with ideas and creating fabulous aesthetics. Technically, I'm probably not actually very good at it! Here's a small selection of the amateur artist's gallery...
Carol Robertson - imitation is the highest form of flattery? I love the impact her dramatic shapes create on canvas, so I had a go. 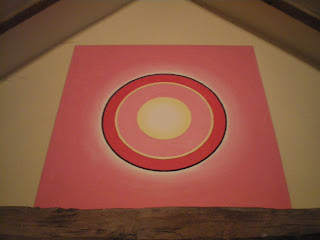 Self portrait. This is a copy from a photo, picking out the darkest patches and finishing up with this black and white imprint, inspiration from all those stunning Hepburn prints in Ikea! 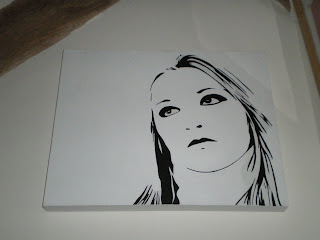 Words on a canvas. It's that word, 'impact' again. But it's true, I love thick free standing canvases. I use cheap ones, that I wouldn't paint anything of a larger scale on, but they're brilliant for a touch of individuality to the mantelpiece. 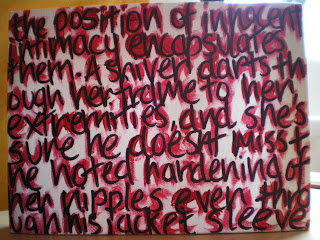 A broken mirror. The mirror was a really stunning art deco masterpiece actually covered in huge bulbous tulips. But anyway, it fell in the bath, so instead of replacing it (impossible, it was older than me and spectacularly trashy) it got its own.. tribute. 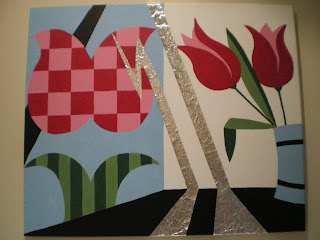 Hubcap girl. A splash of colour and, hopefully, that striking silhouette effect again. It started off as a sketch of a new romantic with unbeatable cheekbones. Not sure how this happened. 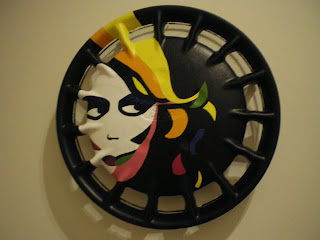